Wandered around Riverside Cemetery in Denver in search of the unusual or perhaps an epitaph. Didn't find an epitaph. Of course there are over 67,000 graves here. That would take a lot of walking. The hot day kept me from doing much walking.

Perpetual care doesn't appear to be part of the cemetery. There is no lawn, but a carpet of green weeds as a result of the recent monsoon rains that have passed through Front Range Colorado. There are a few live trees with just as many skeleton trunks of one time living trees.

This photo may have been in the "high rent" district. The marble and granite monuments were huge and there were obelisks -- some taller than others -- marking several family plots. There were other areas of the cemetery where the grave stones were unimposing limestone and disintegrating sandstone.

The marker with the Arabian statue was for the grave of Addison Elton Baker. He owned a livery stable in Denver. 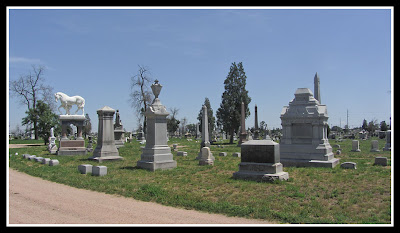 Finding a human statue in the cemetery was a surprise. Usually, such statues are in city parks or along a boulevard. Col. James K Archer "...was an Irish businessman who built Denver's first gas works and introduced gas lights in 1871. He also built the first piped water system in the City, and founded the Denver City Water Company. Col. Archer was instrumental in bringing the Kansas Pacific Railroad to Denver in 1870." With that resume, I wonder why his statue ended up in the cemetery. 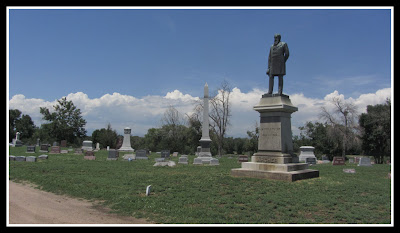 There may have been other unusual grave markers in the cemetery. However, this block of sandstone for Lester Drake was most unusual. Could the width, height and depth of Drake's mining cabin been exactly this size. The front of the marker was about eight feet across. 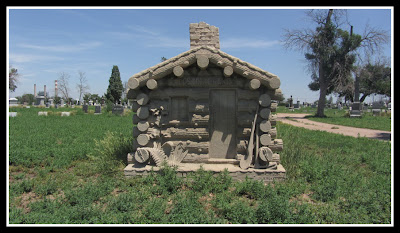 Yup. Been out wandering and found a cemetery.