Wandrin Lloyd was an eight year old standing in the Green Bay railway station awaiting the train which was arriving with aunt Lyla who came for the funeral of Grandma Jo. That train locomotive was black, huge and very loud. Standing as close to the station and behind my father, that locomotive was larger -- and scarier -- than any farm machinery I had every seen.

That was the memory that came to me as I toured the Colorado Railroad Museum and took photos of this engine. The wheels on this trail were about five feet in diameter and there were eight drive wheels for the monster. The cramped space of the museum didn't allow a different perspective of the engine. I was hoping for a small child to come by as I was taking this photo. No luck. 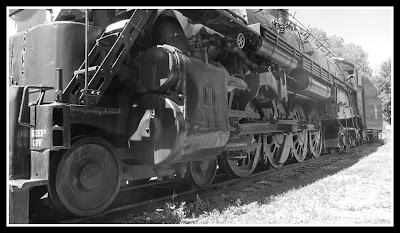 Perspective is tough. This would have been a good time for a self portrait standing in front of these monster drive wheels. 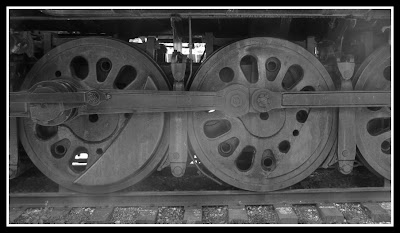 Sometimes the wheels of rail cars need to be replaced. The one time used wheels seem to gather in one particular location. Or perhaps this pile of wheels is the "spare tire" collection. 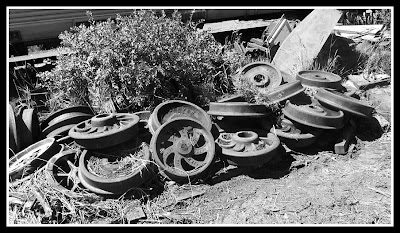 Many of the railway cars and locomotives at the museum were narrow gauge examples. There were a few standard gauge trains including the monster in the first photo. Wonder how they got it into the museum.

In keeping with the historical nature of railroading with steam locomotives, a water tank was on one railway track. Not visible is the sign that identifies location of the water tank as No Agua. Appears to have been moved from New Mexico. The sign indicated No Agua was 308 miles from Denver and 99 miles from Santa Fe. That would place No Agua north west of Taos across the Rio Grande River.

Have to wonder why a place called No Agua would have a water tank for the railway. 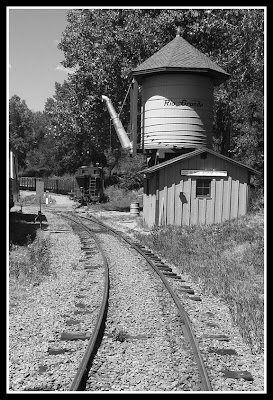 Just Wondering.... Does a railroad museum have any interest to the children born in these early years of the 21st century. Could this railway museum and its rustic examples of railway transportation may become nothing more than raw materials for recycling into a 21st century transportation vehicle.