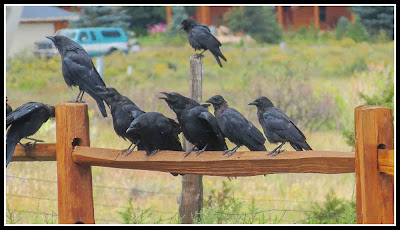 Reviewing photos of the past year, I came across this murder of crows roosting on a fence. Why murder. For those wondering minds, I searched the internet and found this:


A group of crows is called a “murder.” There are several different explanations for the origin of this term, mostly based on old folk tales and superstitions.

For instance, there is a folktale that crows will gather and decide the capital fate of another crow.

Many view the appearance of crows as an omen of death because ravens and crows are scavengers and are generally associated with dead bodies, battlefields, and cemeteries, and they’re thought to circle in large numbers above sites where animals or people are expected to soon die.

But the term “murder of crows” mostly reflects a time when groupings of many animals had colorful and poetic names. Other fun examples of “group” names include: an ostentation of peacocks, a parliament of owls, a knot of frogs, and a skulk of foxes.