Hiking in the myriad of trails in Saguaro East at the end of Speedway this morning, there was plenty to keep my interest and take many photos.

With the sun at the right angle, this tarantula's web was visible as I walked the trail. Centered under the web was the hole for the tarantula. The hole didn't measure much more than an inch in diameter. Since my hike had just started, there was no reason to stay and watch for something to become tangled in that web. Looked like a small lizard could be an intended victim. 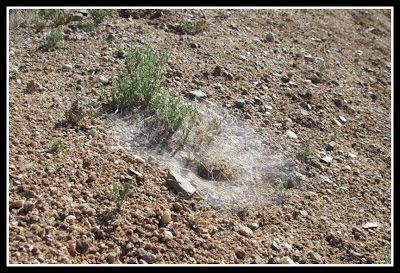 Soon the view seemed to be right out of Jurassic Park as I noted the giant preying mantis. Actually a dead saguaro, but it does resemble an insect. Or a martian with a head of antennae. 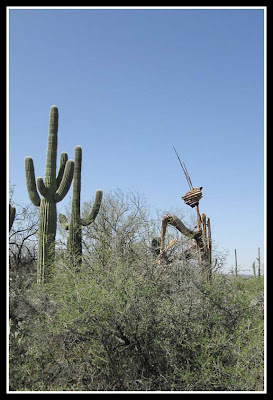 Thought I might see more crested saguaro. However, I spotted just one. 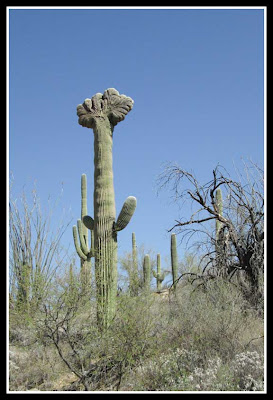 Some flowers were in bloom. These LBF (little blue flowers) were spotted several times along the hike. That flower is about a quarter of an inch across. 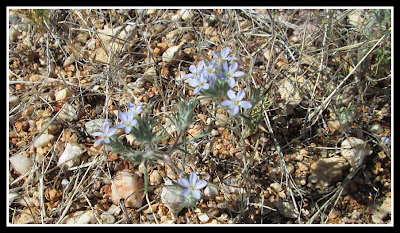 The most frequent seen color was that of the fairy duster. They were in full bloom. 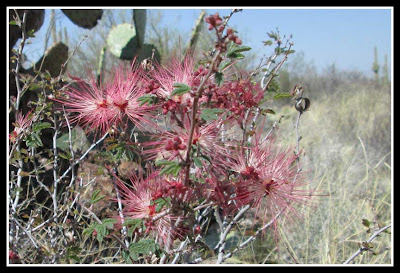 There was a very rare ocotillo with blooms. As I tried to get a photo of one, I noted a hummingbird flitting from blossom to blossom sucking up precious nectar. A visit to each blossom may have lasted a second before moving to another. At this same ocotillo, a butterfly was also dining. (Never did get a decent photo of the ocotillo and the hummingbird photos were blue sky.)

This weekend hike meant lots of activity. In addition to hikers (and runners), the equestrian set was well represented on the trails I was hiking. Stepping off the trail yielding to some riders coming my way, I noted the riders were atop mules. I made the comment to the riders that it was unusual to see mules out here on the trails. The rider responded that this would certainly be my lucky day. Guess it was.

Next unusual spotting was this group of saguaros. Looking closely, it looked like several individuals. Wonder how they all manage to survive. Or could this have been a single plant specimen with shoots coming from the single root system. 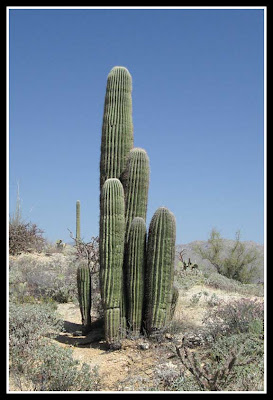 That was when I heard the buzz of the rattler. Struggling to maintain my balance on the trail and not step into the sound, I managed to stay upright. Spotted the diamondback in the grass and shadows about three feet off trail. 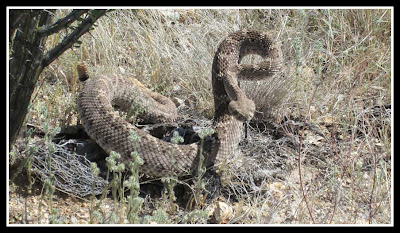 Sadistic little creatures. That rattler could have laid perfectly still and it would never have been spotted. Making all that noise was a sure way to attract attention. No doubt he was training a younger buddy in the art of scaring hikers. His younger buddy may have actually had a video to post on SnakeYouTube. Considering my flailing upon hearing the rattle, it would have made a great video. They had their fun and they scared a couple of minutes out of my life.

These warmer days and warm nights will mean more rattlers along the trails. Considering that they want to scare me, no doubt I will see more of them before leaving the area.