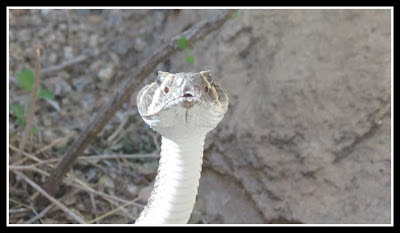 Looking at me was this western diamondback rattler. Scary. Huh? Fortunately, there is glass between that face and me. This was at the Sonora Desert Museum. Stepping back some, here is a full body view. 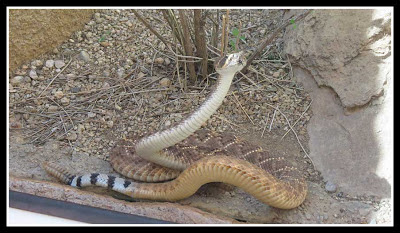 Could it be one way glass. Perhaps we can see the snake, but he can't see us. Just wondering. Didn't seem to matter what movement was on this side of the glass. As the snake waved back and forth on the glass, the movements recalled the image of cobras being serenaded by a snake charmer.

The raptor show is on my "must see" list when I go to the museum. After the Chihuahua Ravens soaring over head, the next was the gray hawk swooping over the crowd of watchers from one baited branch to another. 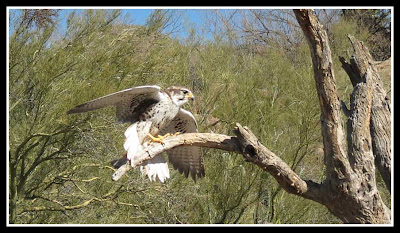 Look at the size of those talons. They appear as large as the hawk's head.

Don't recall if there was another raptor following the grey hawk. Soon a ferruginous hawk was flying from the release area about 100 yards away. That was the last of the show as the hawk dived into the brush obviously finding some movement that looked tasty. These are wild birds. With the ferruginous hawk's disappearance, it was a short show compared to some I have seen in past visits.

At one of the education spots throughout the museum grounds, handlers are holding the kestrel as the docent describes its life, how it hunts and its range. Sure is a cute little specimen. 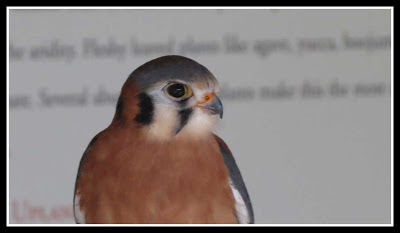 At the exit to the museum grounds, a handler was holding a Harris Hawk explaining its range, how it hunts in a pack, and the pecking order of the hunting group. 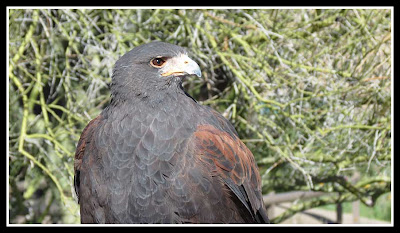 It was a warm day and late in the morning most animals were hiding out in the cooler places of the enclosures. Hence no photos. With no bear running around in its enclosure, there was this chuckwalla checking out the area. Wonder if this guy is a permanent resident of the bear enclosure. Or is he just passing through. 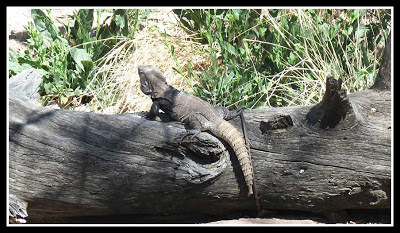 It was another very enjoyable visit to the Sonora Desert Museum. Even if the raptor show was shorter than usual.