A draw for my visits to the Sonora Desert Museum are the daily demonstrations of hawks in flight. It is never tiring as I bring home more photos of hawks. The most recent visit was for the afternoon demonstration of the Harris Hawks. They are pack hunters and share in the kill. 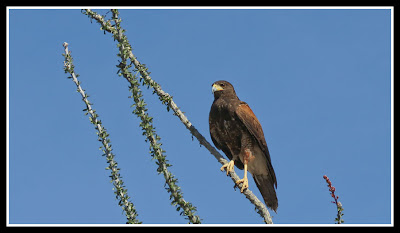 A museum docent tells all about the Harris Hawk, its family units, its hunting style, and far more information than I am usually inclined to get from a bird book. This process is much easier to imprint on my brain. It is a single bird that is described as the family of Harris Hawks fly from perch to perch -- mostly the tops of saguaros.

These Harris Hawks stick around the Museum and are trained with the usual -- food. In this case it is quail breast meat. Like many of the hawks in at the Museum, the Harris Hawks are native to the area and can be found across southern Arizona including Tucson.

While I roamed the Museum grounds, Cactus Wren were seen several times. It is that time of year to make a nest and start the brood. Rather than perching atop a nearby saguaro, I managed a photo op with this one on a nearby rock. 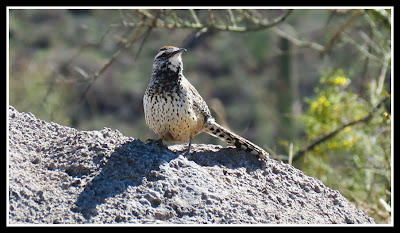 Today while hiking in the desert behind the park, a red tailed hawk was riding the thermals. Never tire of watching a large bird in flight.
Posted by Unknown at 9:30 PM