That is honesty. Don't see that too often in the obits.

My reading of obits isn't some morbid passtime. The ages of the deceased provide numbers for the lottery tickets. Okay. That's a joke.

The real reason.... Working on the genealogy of my ancestors and distant relatives has occupied some of my spare moments for over 20 years. Much of that research includes the reading of obituaries. Continuing to fill in dead ends (is that a pun) within my genealogy data base, I read the obituaries at several area newspapers from Green Bay and northeastern Wisconsin.

The most frequent euphemism for obituaries is "passed away". Two creative euphemisms found recently were "departed this stage of life" and "answered the call to our Creator".

Some people simply "died" while others: "died peacefully"; "died suddenly"; "died unexpectedly"; or "died after a lengthy battle with....".

Some obits could use an editor. One obit that comes to mind is the 98 year old who "died unexpectedly." Sorry. But it is not unexpected when one dies at the age of 98.

Perhaps reading obits is strange. However, it may also seem strange to wander through cemeteries looking for epitaphs. This deceased doctor's epitaph is great. What a prescription for life. 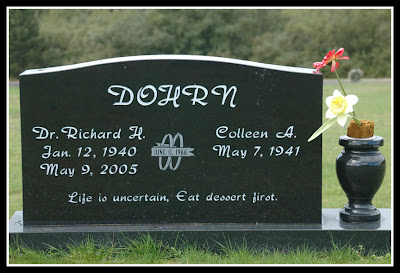 Don't have a photo of another that I had come across: "He was sick, but died well." Could be read one of two ways. He died with dignity. Or he recovered and died.

More honesty from the same obit first quoted above, "...he eloped with ...[name].... Thus began 69 years of a tumultuous marriage."