What's In A Name

In the case of Lloyd, it appears only the first and last letters are important.

Okay. So the name Lloyd is unusual. (Thanks go to Mom for making me special). In 1940, the name Lloyd ranked 100th according to Social Security Popular Baby Names. The last year Lloyd made it into the top 1000 was in 2002 when it ranked 992.

Some Starbucks ask for the name to put on the cup when taking the order. Rarely spelled with two "L"s, I am not one to complain. However, .... 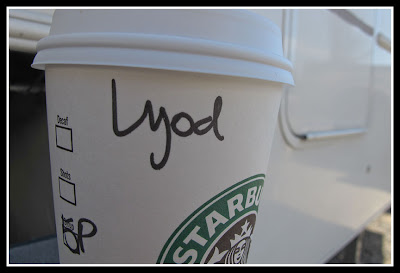 Undiagnosed dyslexia is rampant. Over these many years, I have had the opportunity to see many variations on the misspelling. Most spellers know there is a "Y" in the name., but don't know where to put it. Add to the misspelling in the image these seen versions: Llyod, Loyld and Llody.

Regardless of the disrespect shown this semi-regular customer, I will frequent Starbucks to keep their baristas employed. Yeah. I know it is a poor way to preserve my wealth, but habits need to be tended.
Posted by Unknown at 12:48 PM