My breakfast most every morning is blueberries and full fat plain yogurt.  With the iPad in front of me as I eat, I read the obituaries of northeastern Wisconsin newspapers. The search is for entries to fill out dead ends in my genealogical data base.

The first obits read are in the Green Bay Press-Gazette. The second entry in the list was:

I continued reading the obits from other newspapers. Returning to the Green Bay Press-Gazette, I saved the link for the Pillsbury Doughboy.

This afternoon, when I entered that saved link into the browser, the page could not be found. I wasn't surprised.

I wonder what happened to the person responsible at Legacy.com that had posted that obit.


When I searched the internet for a Pillsbury Doughboy obituary, I found several of them with variations on the same theme. This is one of them: 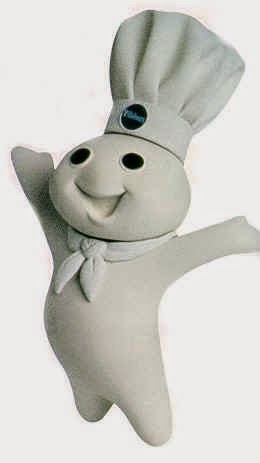 Sad news today, so please join me in remembering yet another great icon of the entertainment community.

The Pillsbury Dough Boy died yesterday of a yeast infection and traumatic complications from repeatedly being poked in his belly during his lifetime. The veteran Pillsbury spokesman was 71. Dough Boy is survived by his wife, Play Dough; three children, John Dough, Jane Dough, and Dill Dough; plus they also had one in the oven. He is also survived by his elderly father, Pop Tart.

Services were held yesterday at 350 for about 20 minutes.

Dough Boy (DB) was buried in a lightly greased coffin. Dozens of celebrities turned out to pay their respects, including Mrs. Butterworth, Hungry Jack, the California Raisins, Betty Crocker, the Hostess Twinkies, and Captain Crunch. The grave site was piled high with flours.

Longtime friend, Aunt Jemima, delivered the eulogy, describing DB as a man who never knew how much he was kneaded. DB rose quickly in show business, but his later life was filled with turnovers.

He was not considered a very “smart” cookie, wasting much of his dough on half-baked schemes. Despite being a little flaky at times, but was thought of a roll model for millions. Toward the end, it was thought he would rise again, but alas, he remained unleavened.