When cousin Jerry and Marilyn came to Tucson for their annual visit, Jerry brought along some old photos when horse power was a real horse. 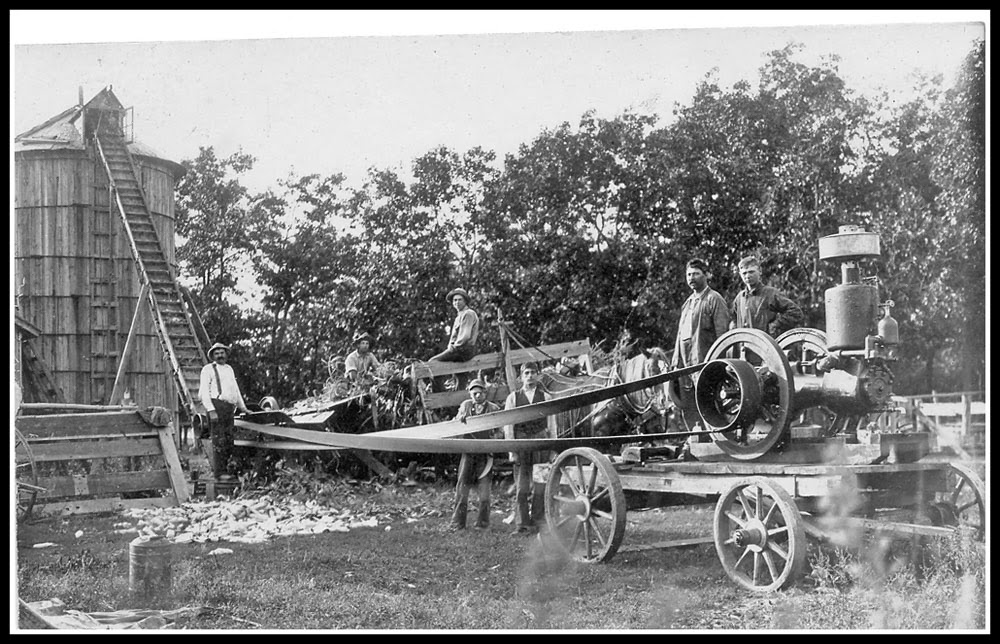 What is going on in this photo.

The location of the photo is a Wisconsin dairy farm in September.

A ensilage cutter is belt driven by a gasoline engine mounted on a wagon. Horses pulled a wagon from a nearby field loaded with bundled corn stalks. The men on the wagon put the corn bundles into the ensilage cutter. The cutter chops the corn stalks into cow bite size pieces and puts on the elevator for delivery to the top of what appears to be a ~15 foot silo.

Delivery of the chopped corn stalks up an elevator preceded later models of cutters which used high speed paddles to propel the chopped stalks through steel tubes to the top of the silo.

The unusual round wood stave silo dates the photo to about 1900. Once in the silo, the weight of continued additional chopped corn stalks will remove the oxygen creating a perfect environment for fermenting the chopped corn. Cows love the flavor compared to the dry hay that represents most of the cows diet.

To keep the ensilage cutter going at all times, there is another wagon in the field. When this wagon empties of its load, another wagon will be there shortly or may have already arrived. That may be the reason for seven people present in the photo.

Making silage 100 years ago took lots of manpower. On the typical 80 acre farm of Wisconsin, neighbors and farming relatives would swap labor -- and equipment -- during the harvests.

Note: In the 1940s as a five or six year old, I recall the silo filling with the ensilage cutter and horse drawn wagons.

For some history of silos: http://www.farmbuildingguide.org/silos.html
Posted by Unknown at 4:36 PM