During my previous visits to the Black Hills, I had passed the Reptile Gardens as something that appeared another of those schlock amusements to part dollars from the tourists. Since the Reptile Gardens was just a few miles away, I decided it was better choice than the very distant exploring that I had been doing. 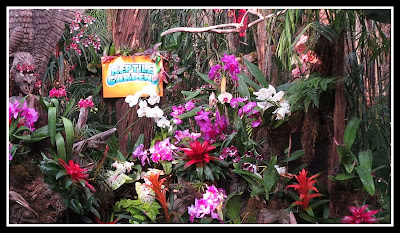 The visit proved to be a great learning experience. The center piece of the complex is a dome of a tropical environment for several parrot and macaw species and several different lizards -- if you were able to spot them in the jungle undergrowth. 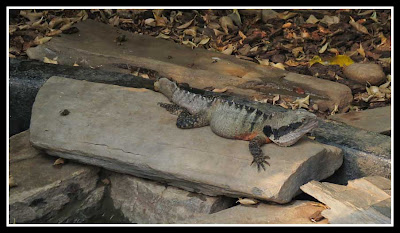 After leaving the dome, my exploring continued as I walked along the walls of glassed enclosures containing snakes from around the world from the most poisonous to the more common garter snake. The collection included all varieties. At each cage, there was a sign identifying the snake, where in the world it was from, its living habits and if venomous -- how deadly. 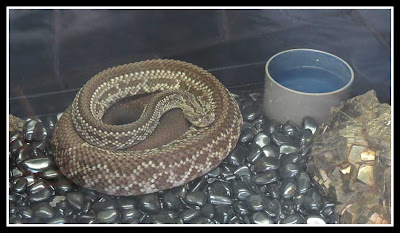 There wasn't a whole lot of movement to these guys. This sign explains that since all their needs are taken care of they have no need to move. 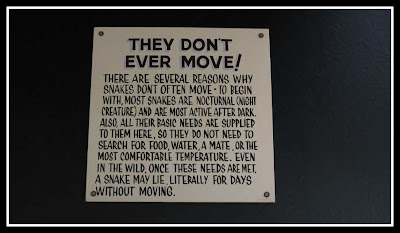 This much larger glass enclosure contained two Burmese pythons.One was an albino. As I walked along I was glad there was glass between me and the snakes. These pythons were scary -- even behind glass. 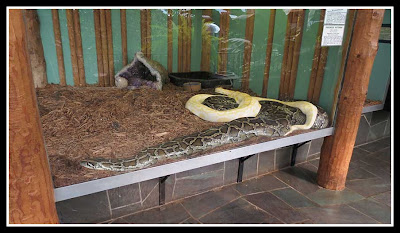 Besides snakes, other creatures are in the glassed enclosures. Lizards and tarantulas are two that I recall.

Outside the domed building are more reptile exhibits. Since this isn't a petting zoo, this enclosure is behind two fences to keep the curious from venturing in to pet the crocodiles, alligators and caimans. 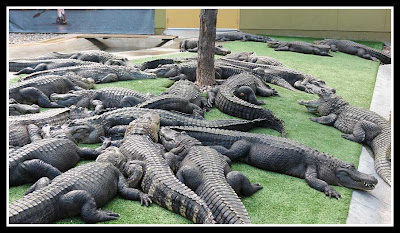 Is this an orthodontic problem. Probably not for a crocodile. But it did remind me to floss my teeth. 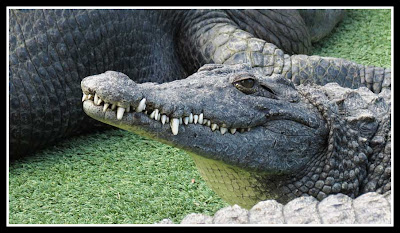 I passed on a bird show to watch this guy talk about and play with these reptiles. The show was quite educational. Note that he did not take a larger alligator to demonstrate his wrestling skills. 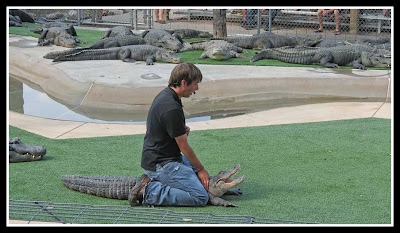 After his demonstration, he assured his audience that we were now trained to handle alligators. Not Wandrin Lloyd! 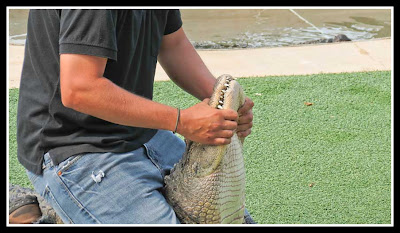 Off to more exhibits within the complex, there was a petting zoo -- of tortoises. This was the only place where the tourists were allowed to pet the animals. Of course that meant there was an endless stream of kids sitting next to the tortoises as their parents took photos. Happened to catch another tortoise in another enclosure that wasn't part of the "petting zoo". 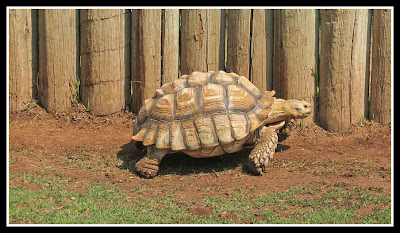 After a couple of hours, my brain had absorbed a lot of new information. Then there were the crowds of the Fourth of July holiday week. It would have been a more pleasant time with fewer people.

The Reptile Gardens was certainly worth the visit. It far exceeded my expectations.