Speaking Of The Budget 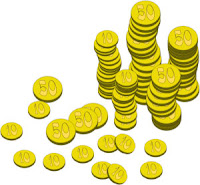 "The budget should be balanced, the Treasury should be refilled, public debt should be reduced, the arrogance of officialdom should be tempered and controlled, and the assistance to foreign lands should be curtailed lest Rome become bankrupt. People must again learn to work, instead of living on public assistance." -- Marcus Tullius Cicero (106-43 B.C.) Roman Statesman, Philosopher and Orator

A long time ago as a manager, interoffice memos were occasionally received to cut 10% from my budget. Not just my budget, but every budget in the corporation. Nothing was safe from the 10% cut -- including some position consolidations and job terminations.

That isn't the way the US Federal government is run. Only a small portion of the budget is being considered for cuts. Why? Because a vast portion of the budget represents votes and getting re-elected. That does get in the way of making a rational decision. The cuts should include all areas, defense, Pentagon, Social Security, Medicare and Medicaid. However, there isn't even a discussion about possible cuts or adjustments in those areas.

A suggestion: Stop manufacturing the penny. It isn't a lot of money, but it is a gesture that there is serious concern about the budget. Losing money on the manufacture of every penny is not the way to stay solvent.